Before Keith Dambrot was hired at Akron University, neither of his two predecessors Coleman Crawford and Dan Hipsher won a conference Championship.

As a matter of fact, the last time the Akron Zips even played in a tournament game was the 1985-1986 season when Bob Huggins team went 22-8 that year.

Upon his arrival, Dambrot was known for his coaching of Lebron James at St. Vincent – St. Mary High School where he had a coaching record of 69-10 with two state championships. Akron wasn’t sure if Lebron would go to college, yet felt that Dambrot was the best coach to help turn the program around.

That season Akron already had two players from the St. Vincent – St. Mary team that won a National Title on their team in Romeo Travis and Dru Joyce, so for Dambrot this was a good fit. With the help of the two, he was able to place a system in right away. Despite missing the playoffs with these two players, their best season was when they went 26-7 and were MAC Regular Season Champs. This was the first of four Regular Season MAC Championships.However, this was as far as this squad would go this season.

In the 2008-2009 Season, the Akron Zips won their first ever MAC Tournament Championship. They would do so again two other times.

In the 2012-2013 season, the Akron Zips would go on to win not just the Regular Season Championship but also the MAC Tournament championship as well. Which was also a first in school history while in the MAC. 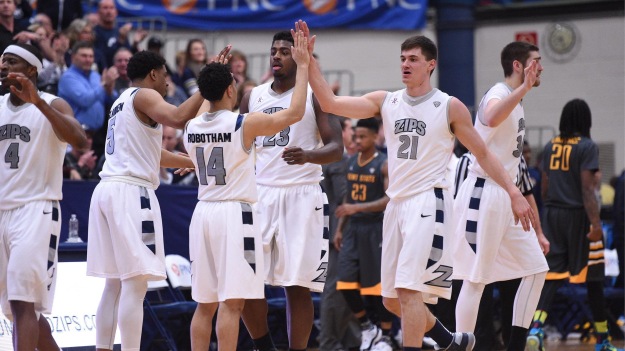 In the 2015-2016 season, the Akron Zips would go 26-9,  a record not achieved since the 2006-2007 season. Currently, this season they enjoy a home game winning streak with the last loss coming almost two years ago. They have tied a JAR home winning streak record of 26 games and on this Friday are looking to break that record. Only a win against nationally ranked opponents has eluded him.

Dambrot has brought the school much success with his coaching ability, scouting, and recruiting with an overall record of 293 games won. The Akron Zips are currently 15-3 overall this season with a 5-0 record in the MAC. They will defend their home game winning streak Friday night as well as their undefeated MAC record. For any of the bigger schools out there looking to poach the successful coach, too bad Dambrot Loves Akron and Is Not going Anywhere!

This site uses Akismet to reduce spam. Learn how your comment data is processed.