Here’s Our Interview with Nick Capozzi

Nick Gives You The Details On How To Join Us

For A Huge Fantasy Football Party!

Check Out The Fantasy Advice and Other Razzball #32in32in32 Stops

Exclusive On Tap At Winking Lizard

The Winking Lizard Tavern chain has scored a major Belgian beer coup and will be the first retailer in the U.S. to offer Vedett Extra White from Brouwerij Duvel Moortgat NV.

Winking Lizard co-owner and beer buyer John Lane tasted the beer three years ago during a visit to the brewery and fell in love with it. Ever since, he’s been trying to bring it into the U.S.

The beer, available on draft, will be tapped Oct. 18 at all the Winking Lizard restaurants, which are located throughout Northeast Ohio and Columbus. That day also marks the start of Cleveland Beer Week. Vedett Extra White will replace Hoegaarden on the beer menu.

The Winking Lizard also will debut Piraat Triple Hop on draft in January on its “Hoppy, Hoppy Handle” at a few restaurants. The beer, which is from Brouwerij Van Steenberge, will rotate among the Winking Lizard locations. 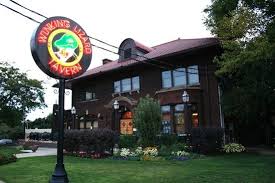 Join Us At The Winking Lizard in Lakewood 14018 Detroit Rd

This site uses Akismet to reduce spam. Learn how your comment data is processed.